In an article I published on MarketWatch on September 23rd, I declared that "The Bear Market Has Begun."

That article garnered a six figure readership (10-20k is normal) and hundreds of comments. I got the typical responses from indexers who never sell (which is a fine concept if your time frame really is 20 years) to traders who wanted to goose the market higher (it did rally in October) to emotional investors looking for answers they won't accept (a rational answer doesn't satisfy an irrational emotion) to conspiracy theories about the financial system, government, industry, aliens, whatever (I'm sure there are some, but not what you think, otherwise it wouldn't be a conspiracy).

The point of the article was that we were unlikely to have a financial crash or an economic collapse, but that we would get a "normal bear market" with the S&P 500 falling around 30% from its high. I suggested that index could fall to as low as 1200, although I think 1600ish is much more likely.

People have a hard time differentiating between the occurrences I mention above. Many folks think a financial crash, an economic collapse and a bear market are all interchangeable terms relating to the same thing. They are not. Here are my short hand definitions:

Financial Crash - when a market or particular asset - which could be in stocks, bonds, commodities or currencies - experiences dramatic price declines on an order of at least 50%. In general, these crashes are short-term in nature as markets overreact to the downside as much as they often do to the upside. In the intermediate term a reversion to mean is usually what happens. Folks who don't sell their positions ahead of a crash, should usually do nothing once the crash has occurred. "Losing money" only happens when an asset never rebounds or - as is too often the case with emotional investors - when the investor sells near the bottom and never takes part in the rebound. A crash is scary, so many investors not only sell near the bottom, but also fail to buy when they have cash available to do so with.

An example of a bear market with some assets crashing was the dotcom bust of 2000 to 2002. We saw prices on the stock market fall tremendously. However, the 50% drops were for the most part in the technology space. Most other stocks fell 20% to 40%, merely bear market territory. While we also saw a recession, it was nothing extraordinary, certainly not an economic collapse, and we recovered within a few years. The stock market, excluding technology stocks, rose to significant new highs by 2007. These events happen every decade or two.

An example of an economic collapse with a financial crash was the financial crisis of 2008. The stock market topped in late 2007 and then started to drift down until it cascaded over and turned into a crash in September 2008. The stock market, and many bond markets, in that case were a response to a developing economic collapse that seized up credit around the world and required massive bailouts of banks to avoid a long depression (folks who don't think a worse depression would have happened without the bailouts are very wrong as it would have taken many years for new lenders to emerge and bring us out of the downtrend). There have been two of these events in a century.

In early 2015 we began to see the makings of a bear market. I wrote extensively about signs of fissures developing in the stock market in the first half of 2015 on MarketWatch. The bear market started decisively on Monday, August 24th when the S&P 500 dropped 5.2% at its worst point from the Friday before's closing price.

Even before August 24th, we have been seeing a rolling bear market as traders take advantage of the fear in the markets by selling short certain assets that they help create a narrative on using the internet.

Here let me pause to explain a few things. What I said in the one sentence in that last paragraph is vitally important to understanding the underlying market dynamics right now. I want to break down each part of that sentence:

This is what everybody wants to know. Well here is something you should know. I don't know. Nobody knows for sure. However, the evidence gives me good idea of what will happen and why, but I just don't know exactly when.

What I do know is that we probably shouldn't expect an economic collapse. That doesn't mean it can't happen, only that it is very unlikely. People do stupid things all the time and pushing ourselves into a collapse by being afraid of a collapse and acting accordingly mob like could cause a collapse to happen.

I think it an economic collapse is very unlikely though as there just isn't a big enough mob of folks to create a collapse. The people who believe a collapse are coming have relatively little money to cause that collapse because they've been busy buying gold for the last decade that's lost half of its value in real terms, on top of the fees those paid for the newsletter that told them to buy gold from a high commission brokerage affilitiated with the newsletter - but I digress.

I also know that the central banks have printed so much money and are willing to print more that a collapse is extremely unlikely. I think after some volatility, that the more likely global situation is a very long, very slow growth period that shows moderate inflation with periods of stagflation.

This is where the prices of stocks and other assets come into play. I do think we will see the completion of the already started bear market. Certain sectors of stocks will crash. Some already have, like energy, which is about done crashing.

I am going to cover this in a MarketWatch article, but the reason we are seeing a bear market is pretty simple: world markets are adjusting to what I call "slow growth forever." As my "Bear Market" report covers (which you can now get free), the combination of debt and demographics simply are preventing a growth to every be what it was before. Governments and many corporations have spent and taken on debt as if we will get higher growth. Alas, they are finding out different and that is holding things back. Here is a chart from my article "Global Growth will Never be the Same:" 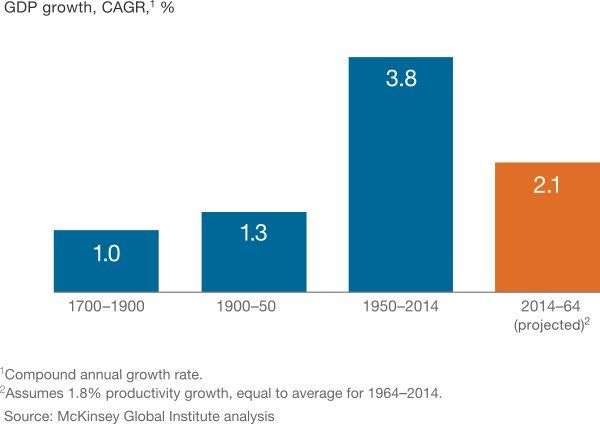 Could we see a recession? Maybe, but I have discussed that before too. I think we are likely to get a rolling "skip-straight" recession for several years. That is, slow growth, with the occasional strong quarter and the occasional weak quarter - often the first quarter or second quarter.

Ultimately, this bear market, like all others, will end. Probably sooner than expected since most people are just realizing we are in a bear market that started almost half a year ago.

In the very short-term, I am heavy in cash and for appropriate accounts, trading in order to make money on declines in stock prices. I am however looking for investments that I can hold for years that will have growth, realization of underlying value and do well in a moderately inflationary slow growth economic environment but not suffer if the economic environment is different (my ex-wife tells me I've been wrong before).

I lean towards several types of investments in no particular order and only if they meet very specific criteria:

I invest across all market capitalizations in order to balance portfolios, however, prefer middle size companies which are big enough to survive downturns and small enough to be bought out.

Here's a chart that I like to show, it's out of date, but still good. The relationships hold during almost any 20 year period. I like investing on the left side of the chart:

I'm at my word limit, so will stop here. I have a lot of articles planned for MarketWatch this year, so please follow along there. In the meantime, remember this thing I remind myself of daily: