The most true thing I have learned about investing in my career is that most people are bad at it. Emotions get the worst of more investors than not. Rational decision making is an art that is often lost when it comes to money.

Early last year I warned about something I knew was beginning to happen. Investors had seen the market go up four out of five years and they wanted in. They were suffering from what I dubbed "I'm-missing-it-itis." As a result, after being under-invested in stocks from 2009 to mid-2013, there were huge inflows into the stock markets. Last November, on MarketWatch, I asked "How bad will new investors get hit?"

That people invest poorly is a cyclical event - that is they keep repeating the cycle. While we know that we are supposed to "buy low and sell high," too often, people "sell low and buy high." Of course, we can't be perfect and always invest at the lowest points in the markets, or more importantly, in a company's stock, but we can try to by placing reasonable valuations based upon real business factors versus the emotions of the day.

While we are all aware that fear and greed are two emotions associated with the markets, there is one that is almost always overlooked - complacency. I suppose it is ironic that we overlook complacency. This emotion occurs because we feel at ease. We see something we like happening and that causes us to stop analyzing whether or not it is reasonable that it is happening, or whether it is likely to continue

In a March of 2008 article in the Financial Times, Robert Arnott talked about complacency and market volatility:

"...for the true long-term investor, volatility is our friend...

Also, the link between volatility and performance is far stronger than most people think (and stronger than theory suggests): selling in quiet markets and buying in the face of turbulence is profitable...

Complacency is usually broken by a bout of fear or a feeling of wanting and greed. It is vital that we try to recognize and overcome all of these emotions.

Where are the markets now?

Early this year, I started to warn people that the rally in stocks was likely to take a breather. The two reasons were that global aggregate demand was not strong due to demographics and the continued unwinding of debts. I've covered what I have called a demographic depression as far back as a 2010 letter and again on MarketWatch.

With the expected ending of the Federal Reserve's quantitative easing program, we have indeed see the increase in volatility and a minor correction that I expected and discussed earlier in the year (see the above linked articles from May and September).

Over the past few months, one of the biggest corrections has been in oil. The below chart shows the decline vividly. 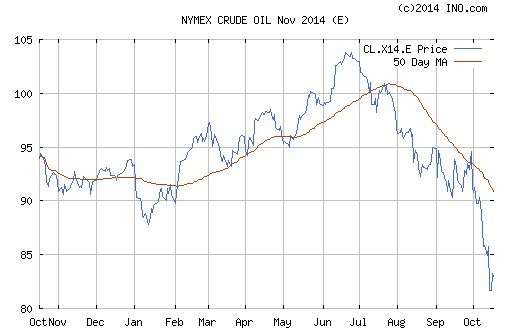 The drop in oil prices has been due to a pre-winter supply surge, a slightly lower than expected demand and the strong dollar. Some have called on Saudi Arabia to cut production, but with Europe still at odds with Russia, they are likely to clear their supply with more shipments to Europe. Also, with global growth challenged and a potentially harsh winter coming to the U.S. again, low energy prices could be just the stimulus to keep the slow uneven economic recovery going.

I expect the temporary supply glut in oil to clear up soon as more middle eastern oil and gas makes it to Europe for the winter. That should lead to oil getting back to its equilibrium price in the $90s per barrel. If that doesn't happen by spring, we can expect some U.S. drillers to slow down their new drilling plans for summer of 2015. Either way, don't expect the price of oil to continue much lower for long.

The fall in oil and natural gas prices has led to rather large corrections in energy stocks. This is a temporary event. I have been using this as an opportunity to add natural gas, oil and solar stocks at or near 52 week lows.

In addition, with energy being cheap, and that being stimulative, on top of the gradual employment recovery, I have added two retailers with spectacular balance sheets to our portfolio. I have also added to our position, after taking profits in September, in an online auction company that Carl Icahn has a position in.

So far our stock portfolios have handily beaten the markets. Every portfolio that has been open a full year is up a double digit percentage. Newer stock portfolios are up in the single digits. We have been buoyed by having no significant losers, quite a few winners, two big winners and one spectacular winner again - a different company that last year.

Fund portfolios are plus or minus a few points of the S&P 500's return for the year so far. We have been heavy in cash holdings in fund portfolios as risk has been high and trends have been weak. One of our recent trades was to take a position that volatility would rise vs just keeping money in cash. We made a double digit return in about two months on money that otherwise would have sit in a money market at a very low rate as we waited for an opportunity. We have taken the past month to buy into three new funds that are just coming off of big corrections. I expect those funds to lead for an extended period.

Over the past several months I have been sharing ideas and information with a group of accomplished investors who have a very diverse background in the financial world. One of these people is Cody Willard who has been a hedge fund manager, anchor on Fox Business and recently started an online social media website for investors and traders called Scutify. I was invited to be one of "All-stars" on Scutify.com and agreed - you can find me there discussing investing a few times per week.

While we are not day traders or swing traders, being a part of that community has already helped me with entries into positions in companies I want to own. We have also already benefited from one very good stock idea.

Yesterday and today I was able to talk to two different mutual fund managers about their funds and the underlying companies they were invested in - companies that we are also invested in.

These sorts of collaboration have turned out to be the biggest advantage of my relationship with MarketWatch.

Over the past few years I have helped a number of clients manage their 401(k) plans. That was a "beta" test for a program I had hoped to launch nationally. Beginning officially this quarter, I am offering to manage 401(k), 403(b) and 457 retirement plans for a flat annual rate. Others who provide this service usually take a percentage of assets under management. Since this is a very scalable service, I am charging either $401, $800 or $1600 per year for the service depending on structure of the retirement plan. Look for details on the website soon.

I know that there is still an underlying trepidation in the world today following the financial crisis and "great recession." People are still concerned about the future. I hear folks all the time talk about the world is going to heck in a hand basket, or some iteration of that.

Here's what I know. The world has gotten better every decade since the dark ages. Sometimes the world gets better faster, other times slower. We often have a step or two back, after or before we've had a few steps forward. That is natural. Progress is uneven.

Over the next twenty years, I categorically guarantee life will get better. It won't be easy and it won't seem fast. But think about where we were twenty years ago. Technology alone has changed life at the consumer and household level. And it will again, this time, I think the changes will come in energy, agriculture, water and medicine. We're already seeing it.

Quality of life globally is getting better, even if all we hear about is an Ebola outbreak. So long as we understand that we are shepherds of the planet and have responsibility to ourselves, our families, our friends, our communities and to future generations, we will keep making uneven progress at a better world.