--- I have updated the charts as of August 2014 due to heavy interest to this page. I have not changed any prose, so right or wrong, this is where I was in October 2010. I am still of the belief that demographics will be challenging most of this decade, but that the 2020s look good as the "echo boom" or "millennials" enter peak spending years and emerging markets emerge. Until then, we must pick our spots as investors and be mindful of risk, particularly in the currency markets and due to derivatives running rampant again. I do expect a significant market pullback sometime the second half of this decade, probably about half of the gains from the 2009 bottom will be given back. For example, if the S&P 500 ultimately gets to 2700 which is the high end of my anticipated range (2200 is the low end), we would give back about a 1000 points as the 2009 bottom was 666. With regard to Harry Dent, I believe he is being overly pessimistic and his time frame is once again not quite right due to a few factors I believe he does not incorporate into his research. That said, demographics are completely understated by the majority of analysts and Dent is right to make it a significant macro-forecasting tool.--- Kirk

Much blame has been laid regarding the current state of the American economy.  While there is ample blame to go around, most of it is misunderstood, if not outright misplaced.  The United States is in a long term economic aggregate demand decline not exclusively due to the foolish, arrogant and greedy economic policies of both the government and financial industry of the early 2000s- which we have covered- but because of a larger problem that can not be quickly solved.  The United States is suffering an aggregate drop in economic demand due to an aging population.  The depression is demographic in nature.

Economist Harry S. Dent coined the phrase "demographics is destiny" in the 1990s.  His general economic predictions, widely shared, have been generally very accurate, even if his stock market predictions have lacked precision.  The chart to the right (below) demonstrates the simple idea that the size of the population is extremely important in driving aggregate economic demand.  This is common sense, but generally overlooked, possibly because it is so obvious.  Once we grasp what is going on with the population, we come to one conclusion: the easy times of the 1990s and early 2000s are over and not coming back soon.

By looking at the chart, we can see that the baby boom generation drove the economy up for decades.  Because household spending peaks in a person's forties and early fifties we see that due to the size of the baby boomer generation in relation to the "X" generation, we can expect a prolonged slump in aggregate demand to occur as boomers enter their sixties, as is happening now.

The drop in aggregate demand will persist as most baby boomers simply do not have enough money to retire and are thus cutting back on their spending long term.  Many boomers who believed that they would be able to sell their homes for hundreds of thousands of dollars in profit are being sorely disappointed.  Real Estate is depressed, and likely will stay depressed through the decade or longer due to the simple fact that the generation behind them is much smaller than the boomer generation.  There is even a possibility that real estate could stay depressed for two decades as the baby boomer children, known as the "echo boom" or "millennials" might not create much demand price push.  Why would this be so?  I believe many of them will move back in with their parents when their parents are elderly, which will actually add a home to inventory, instead of subtracting one.

Another factor in real estate prices is immigration and the naturalization of millions of undocumented residents.  While many do not like the idea of granting millions of people work visas and paths to citizenship, doing so would likely add more support to the real estate market as people would gradually turn from renters (who do not pay taxes) to owners (who do pay taxes).  Regardless of longer term trends in real estate, the shorter term appears to be a generational buying opportunity for those who have a decade or two time frame to resell. 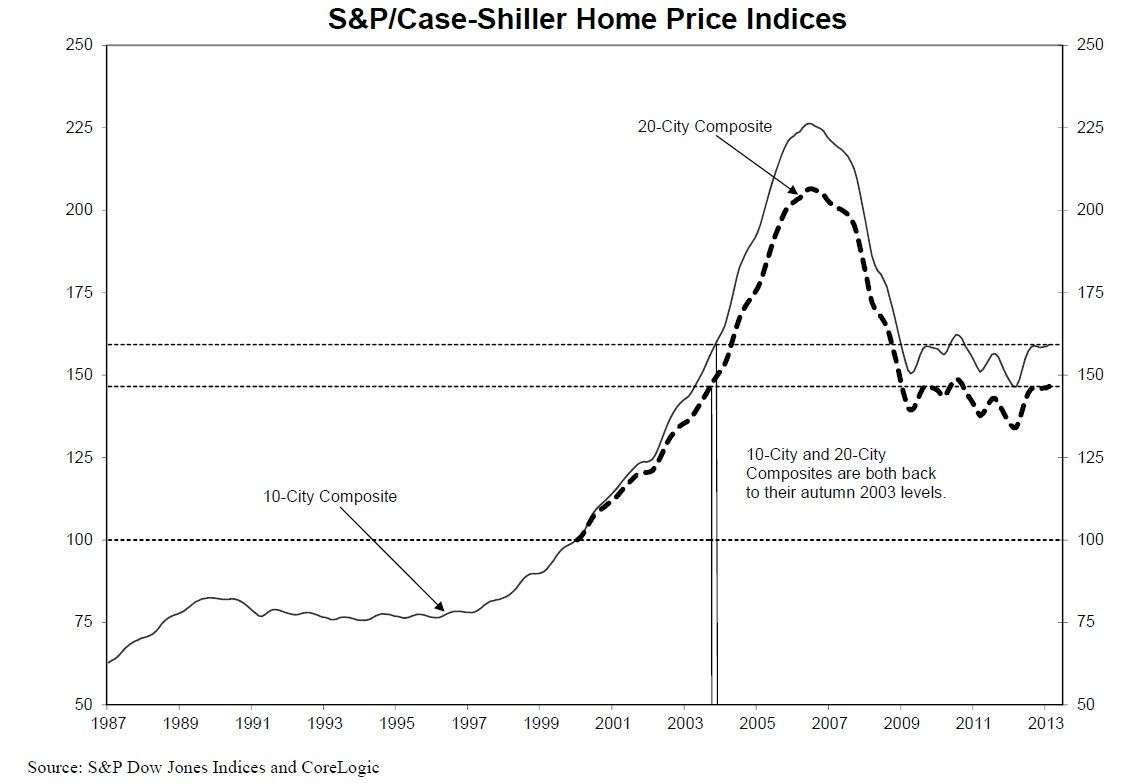 The chart above shows that there is still likely some downside left in home prices.  While I believe that is true for the next few years, it appears that the downside is being mitigated by money creation in the United States.  That money creation should put some sort of a floor under home prices soon.  However, due to the lack of aggregate demand there will not be a rebound in home prices soon.  My general advice to clients is to sell at the price they can get if they are in need of selling.  My advice to younger clients is save as much cash as possible as quickly as possible, even at the expense of making some contributions to retirement plans, and buy property if they have the stomach to be property owners.  There are two types of properties I am recommending:

While the picture looks dire in the United States short run, there is hope.  The demographics of some of the emerging markets are as positive as the demographics in the United States are negative, maybe even more so.  Because the world economy has become more globalized and interdependent, the emerging markets ought to lead the developed world out of its slump sometime late this decade or early in the next decade.  Developed nations that have regained their competitiveness by then will thrive once again.

For the United States to regain its competitiveness, two things need to happen quickly.  The first is that we have train the work force to produce again.  In general, the jobs we need are skilled trades, technical, medical and scientific in nature.  We need engineers of all sorts, project managers, high-end machinists, scientists, biotechnicians, nurses, doctors and skilled manufacturers (CNC), among others. Next, the United States must develop an energy policy that makes sense.  Without a sustainable energy policy, which will necessarily include changes to transportation, the United States stands no chance at overcoming the debt we are taking on to maintain our current standard of living.

There is an enormous catch 22 to the emerging markets demand growth in the next decades.  Although they will demand more of our higher end goods, they will also demand more natural resources.  This means that our ability to import energy at reasonable rates- it was down right cheap from the early 1980s to the early 2000s- will evaporate.  Hence, the importance of finally putting together a real energy policy in the United States.

I will try to come full circle here and discuss the current politics in regard to the current economics.  This has been a point I have been making in my seminars.  While there is an uproar about the government debts being piled up, it is important to remember why the federal government is spending about 6% more above GDP than usual.  They are doing this to keep the standard of living from falling off any more while we wait for global demographics to assist us over our domestic demographics.  How many of us would sacrifice our standard of living to balance the national pocketbook?  When it is put that way I have found that few people want that set of alternatives.  In fact, I have asked that question at my seminars, and nobody has raised their hand to volunteer a lower standard of living for a hypothetical greater good in the future.

Why do I call it a hypothetical greater good in the future?  Simply put, the debt arguments made by demagoguing politicians are overblown.  The United States is currently spending about 6% more than normal federally.  We are also engaged in, and likely to engage in more monetary actions (various forms of creating money). This is not as big of a problem as some would make it out to be.  There is a growing demand for tradeable currency in the emerging world, we are supplying it (we discussed this before).  It is really better our dollars around the world than some other nation's currency.

So long as our debt does not exceed what we had as a percentage of GDP following the Great Depression and World War II we will be fine.  We will need to slow our spending by the middle of the decade to stay in the safe zone, but cutting spending is not required immediately, and we do not need to balance the budget until the next upturn- which could and hopefully will happen just by pursuing fewer wars.

We all need to realize that what is going on now is about as serious economically as the Great Depression.  Remember, despite the huge federal debt after World War II, the United States went on the greatest economic run in history during the 1950s. The force of emerging market growth will be at least as great as the need to rebuild Europe and Japan after World War II

While I do not subscribe to any unifying theory of economics, neither Austrian or Keynsian, I do know these:

There is, and should be, debate about whether the current spending is being done right.  I talked about that almost two years ago BEFORE the spending actually took place, discussing that government spending was necessary, but that we had to do it well.  Today the discussion shouldn't be about cutting short term spending, it should be about how to best spend to get ready for the future.  We can cut budgets later when threats to our standard of living have subsided.  If we cut spending and money creation now, we might not get to the next boom, as the demographic deflationary forces are too strong to be ignored for the next few years.  Might I suggest we get started on that new energy policy and rebuild our infrastructure.

Your realizing that standard of living trumps ideology advisor.  Until next month when we will have a post election discussion.