The Dollar and Credit

Nothing in America is more important than the dollar.

I know this chart doesn't mean a lot for most people. Let me explain. Back in 2012 on MarketWatch I talked about how the dollar would strengthen at a time when almost everybody else was talking about it collapsing. I gave a list of reasons. Since then, the dollar has in fact risen quite a bit (even if people don't realize it, like a friend of mine at another financial firm).

A strong dollar is important to people's standard of living. As the dollar strengthens, it helps you to buy more with your dollars. That's good.

If the dollar gets too strong it can cause exports to drop. Sometimes, that causes a recession, however, not usually as other economic activity picks up.

You will hear a lot in the media about a need to keep the dollar from rising. Don't fall for it. The dollar would have to rise a massive amount in a short period of time to be cause for economic damage to the economy. Why is this true? Because only 14% of the U.S. economy is based on exports (World Bank statistics). The other 86% of the economy is domestic.

In addition, of the companies that export, many export things that are not very price sensitive (elasticity of demand for you other economics geeks), meaning, even at higher prices, the product will sell anyway. So, in reality, the only companies that are hurt are companies exporting easy to compete with products in the first place. We shouldn't worry about propping up those companies at the expense of the rest of us.

The biggest threat to the dollar is in fact what many people often talk about without knowing what they are really talking about, that is borrowing.

In the chart below we see how credit has expanded in America since the early 1980s: 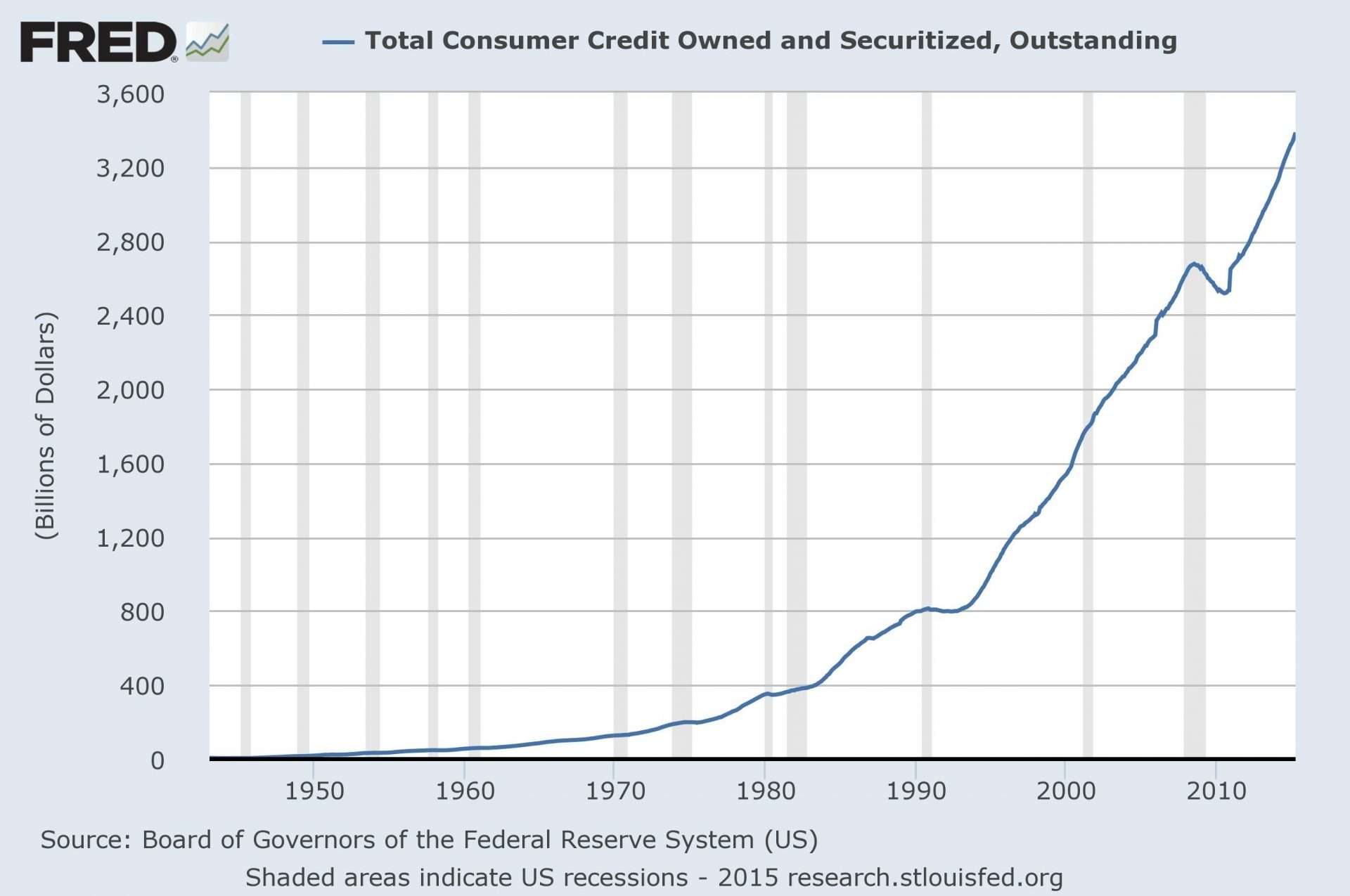 You'll notice that in 2007-09 the credit system started to correct. It wasn't even really a collapse. Yet, we printed trillions of dollars since then to prop it up. Most of that money has found its way into assets. We've seen the stock market triple since 2009 and are seeing real estate prices surge again as well. Real estate prices are very uneven by city and area. Depending on where you live, it might take about 25% to 30% of your income to own a home or it might take over half.

In those places where it takes about half of household income to have a house, expect very bad things to happen soon. First of all, that's just too expensive in general, but also, when the economy slows down, and it always does, many of those incomes will fall. Then what?

What I can tell you is coming soon is a strong dollar event or series of events. We can tell there is liquidity problems globally already. Especially in emerging markets. China is not nearly as strong as many believe either.

Why do emerging markets and Chian matter to the dollar and the credit markets? Because that is where most of the growth in the world was supposed to come from, but we aren't seeing the growth necessary to pay down the debts that have been run up in bond markets.

Right now we are seeing Greece in the news everyday. It's not because Greece is a big economy with major direct ramifications. It is because the world can't even handle a small nation's debt issues. What happens if Italy, Spain or Japan start having the same problems that Greece is having?

Around the world we are in fact seeing major debt issues in developed markets. Much of it is driven by demographics which I've talked about frequently. As populations age, the number of people taking out vs contributing to the a nation's balance sheet grows. The oldest countries are in big trouble in coming years. Japan is at the top of that list as one of the oldest and most in debt.

So, while the U.S. certainly has debt issues, the reality is that American debt issues are only middle of the road globally speaking. The U.S. is in a position - due to all the reasons mentioned in the article linked above and more - to be the winning currency again when the bad things happen. One very bright note is that consumer debt has fallen since 2008 and has only inched back up. That is good since it shows a smarter approach to credit. 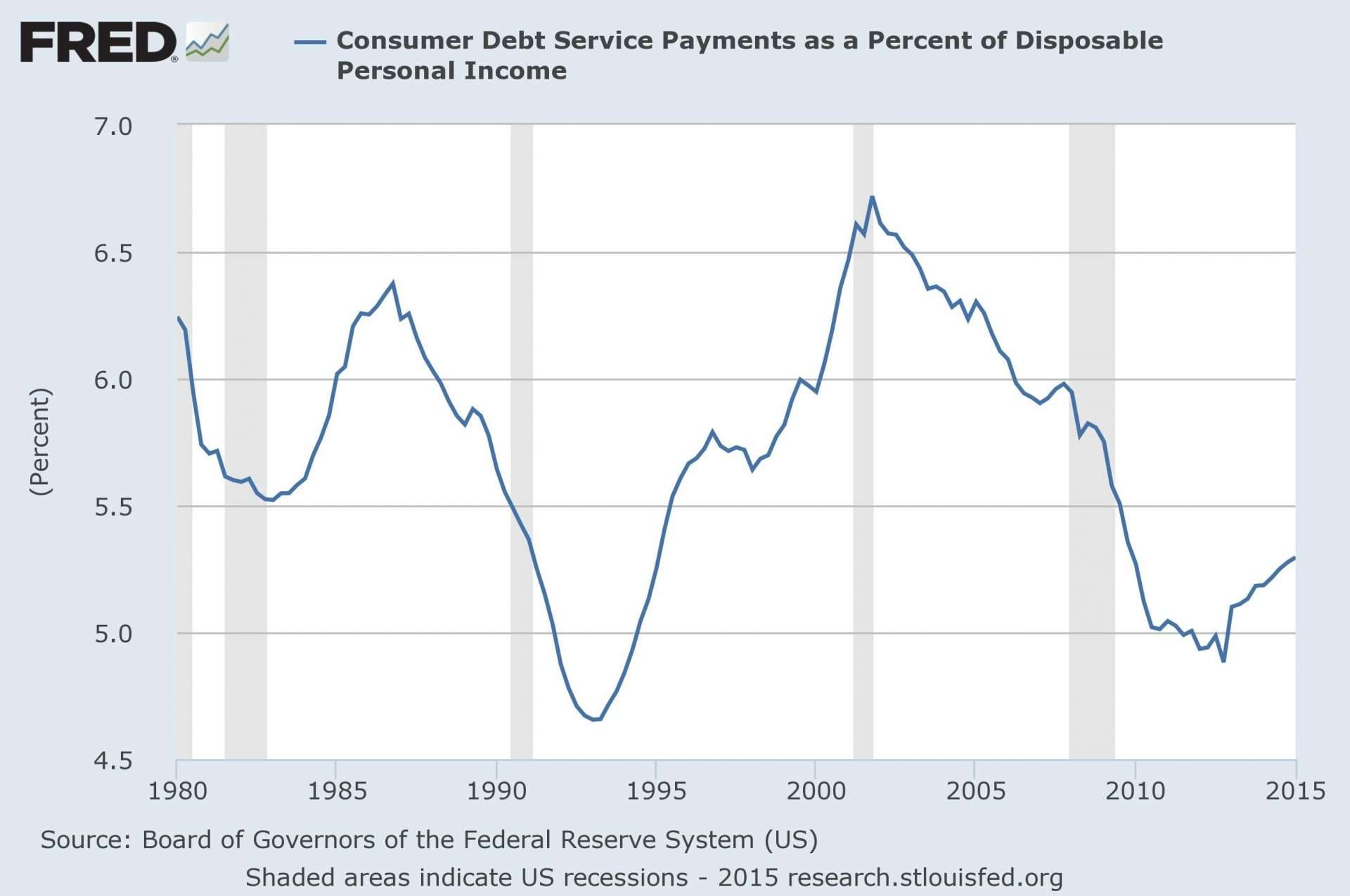 Eventually, a stronger dollar will cause asset prices to fall for the same reason that the stronger dollar allows you to buy more other stuff. I expect that event will coincide roughly with the United States needing to refinance about $3 Trillion of debt that is coming in the next year or so.

Prepare for that stronger dollar event by accumulating cash.

While the media and most financial planners put their faith in a rising market over time and are generally bullish all the time, I think it is time to step away from them. While they are often right for a long time because the markets do go up for long periods, they are very prone to losing half of their or your money once or twice a decade. So, just as they were wrong in 2000 and 2008, they will be wrong again soon. Why? Well, because most of them are just media mouthpieces or salespeople. While I have nothing against the media (I get in there sometimes) or salespeople (I've been one), the vast majority have little clue what they are talking about - about 4 out of 5 from what I can tell. Worse yet is that some deliberately mislead. If you want more on some of the unethical behavior in finance, read my weekly view at my investment letter for self-managed investors from last week.

People who invest with me know I use two methods to invest.

The first and more important piece of investing that I look for is value. In short, I want to buy assets that are worth more than the price I pay for it. Sounds simple, but the reality is that the market rarely offers value. That is very true today. I am seeing fewer stocks and stock sectors undervalued than at any time since 2007. The one broad exception is natural gas stocks where we will see a bull market soon as I discussed recently on MarketWatch. I am buying natural gas stocks.

The second aspect of the markets that I measure the underlying strength of the markets and specific assets using quantitative measurements (or more accurately, I purchase the analysis of several quantitative analysts and study). The simplest way to understand this is that we are looking at the supply and demand for assets in the market. When demand (buyers) is rising faster than supply (sellers), prices rise. The opposite is true as well.

Right now we are seeing buyers slowdown and sellers slowdown. More ominously, we can see roughly who is buying and who is selling. What we know is that richer people are selling to poorer people, essentially trickling their assets into the markets. This has been going on since the end of 2013. I discussed that on MarketWatch as well in an article titled "Big money is moving to cash and so should you."

Diversification has to do with having different assets that are non-correlated, that is, don't get beaten up at the same time. Assets aren't all based upon the stock and bond markets.

The most egregious mistake people make with their stock and bond portfolios is buying too many assets. This virtually always happens when using mutual funds, those high expense, third tier investments that the financial industry peddles like candy at a parade.

We know mathematically that owning about 30-50 stocks, presuming not buying many from one industry, offers adequate diversification from any one stock blowing up a portfolio. Yet, people end up owning hundreds of stocks via mutual funds.

In addition, not only does owning too many stocks not cut risk, it severely limits upside. Name a multi-millionaire or billionaire who got there by being highly diversified. You can't do it because it's never happened.

Warren Buffett said that "broad diversification is protection against ignorance."

Buffett has also said most people should just invest most of their money in index funds. What does that say to you? It says he thinks most people can't invest well because they don't understand it.

That leaves you two good options. Find somebody who isn't ignorant to invest your money and who understands that mild diversification is the best approach or invest in index funds and ride it out through the ups and downs. I think I have a good option if you'd like to find a real investment advisor.

So, here's my summary advice to folks:

Advice #1: Accumulate cash in your bank accounts and in your retirement plans by putting at least 25% of your 401(k), 403(b), 457 Deferred Comp, TSP or other plan into the safest investment option offered, i.e. stable value fund or money market. Many people at this stage would be well served to hold 50% in the safe option (not locked in CDs or annuities though).

Advice #2: Buy real estate, but don't overpay. This might require moving somewhere that's not your top choice today and waiting patiently while accumulating a 20% downpayment. I have noticed here in Milwaukee that two formerly nice neighborhoods that had been deteriorating since the late 1980s, are making very good comebacks on the back of younger people moving in and blending in with existing residents who are committed to the neighborhoods. Look for the areas of cities that are just starting to comeback if you want to be in a city - don't go for the top neighborhoods as you'll usually overpay. If you prefer being suburban, I suggest the biggest piece of property you can afford and take less house if you need to - you can always add on when you have more money. Land values are sure to rise as population continues to grow. And, you can grow some of your own food.

Advice #3: Diversify less. Own a basket of stocks for the long-term that is very carefully selected, monitored and only periodically traded. Fire any financial person that is charging you to have a portfolio that owns hundreds of stocks via mutual funds.

If you do just these 3 things, you will beat Wall Street for the rest of your life.