The S&P 500, which represents the large companies in the stock market, has been staging a rally since the early February mini-correction lows on hopes that everything will be okay. There is a good chance this rally keeps going for another month or two as it sucks in folks who catch a case of "I'm Missing-it-itis." We shall see.

Regardless of what the stock market does in the very short-term, there are a host of risks piling up that threaten to not only cause a very significant stock market correction this year or next, but also throw the global economy into a shallow recession or possibly even another financial crisis - although as I'll explain, the financial crisis scenario is not likely. 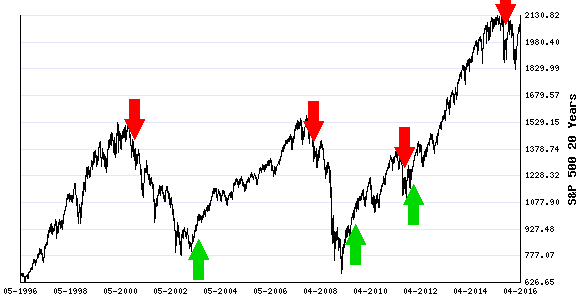 As I have discussed on multiple occasions, global economic growth going out at least another decade, and more likely to the middle of the century, is going to be about half what we experienced from the post World War II period through the early 2000s.

There are two primary causes of the slower economic growth that we are destined to see - which I have dubbed "slow growth forever" on MarketWatch. The first is aging demographics in the four largest economies on the planet - America, Europe, China, Japan - as well as, in many emerging markets that we had counted on for growth to offset the more mature economies slowing down. The second major cause of slower economic growth is the massive amount of debt that the world has accumulated.

I don't want to paint a picture of gloom and doom however. I merely want to point out reality. Among the realities are that the Millennial Generation is doing a great job so far helping America become an island of economic stability in a world that is troubled. Another is that climate change, while ideologically a sore subject for many, for better or worse, is going to help create the jobs necessary to avoid a major demographics and debt induced depression.

There are a litany of global economic problems that are all marching towards needing resolutions in the near future. When each issue reaches the point that it must be reckoned with is unknowable for certain. It is very possible that any one of the issues that I'll discuss below, could ignite a situation that leads to all of the issues coming to heads virtually simultaneously.

Janet Yellen, the Federal Reserve Chairperson, has on several occasions cited global economic risks as a reason for not raising interest rates in the United States with any urgency. Her concerns are legitimate and should not be underplayed regardless of what many media or Fed critics say.

Almost all of the global economic issues are derived from at least one of the common themes of too much global debt or too many obligations to aging populations resulting in slow economic growth. A wild card economic issue is the gradual transition away from an oil based global economy which has resulted in the collapse of oil and gas prices short-term.

Here are the five things I am most concerned with. None of them might be the straw that breaks the global economic camel's back. There very well could be, and probably is, a "black swan" out there that will surprise us and lead the world into the next resolution phase for global imbalances.

The Boomer Bust is Real

In the past two years, the Baby Boomers have been net sellers of stocks. This is a massive sea-change in the markets. For decades, the Boomers savings has been THE major factor in creating demand for stocks and the resulting rising prices of stocks. Today, that demand has dried up. I don't think it is ever coming back.

In 2015, we saw that small and mid-size company stocks got beat up terribly. Only the stock buybacks by large corporations kept the large company indexes from falling significantly. Even those buybacks have not been enough to drive the markets to a new high since last May 2015. In fact, "the market" which people identify with as the S&P 500 has been range bound for about a year-and-a-half now.

With three-quarters of Boomers having less than six figures saved for retirement and another significant portion having retired too early for their savings level, there is virtually no chance that demand for stocks will come back in the next several years. While it is true the Millennial generation is now larger than the Boomers, they simply do not have the incomes yet to offset the Boomer withdrawal from the markets.

What To Do as an Investor

Knowing that risks are rising and that the Baby Boomers are no longer net buyers of stocks is enough to make a lot of investors head for the hills. It is understandable. However, there is another factor to keep in mind. The central banks of the world do not want deflation for any extended period of time. That means that the Federal Reserve and other central banks will intervene again at some point and push markets higher through various means of monetary easing.

In the short-term, I am very conservatively positioned within investment accounts. I am waiting for a pullback in markets to get more fully invested again. It is that simple of a strategy.

I am doing some minimalist trading and hedging, in addition to holding onto a few core long-term positions, but in virtually every account, I am very heavy in cash for now.

When the next leg down in market occurs, I will use that as an opportunity to get back into longer-term funds and a few blue chips stocks that are in sectors that will do well going forward.

I think most investors should follow that lead. The hard part will be buying when the correction hits. Emotionally that is difficult to do. Investors must control their emotions or suffer permanent set-backs.

A Word to Millennials

I know that you are in or coming up on your first years as investors. If I could only tell you one thing to do financially it would be buy real estate. The stock market is going to be a tough go for years. Real estate is a tangible asset and there are a lot of Baby Boomers looking to sell. Find Boomers who need to sell and negotiate good deals.

As for your 401(k) plans, I know what the common wisdom is. It's wrong. Save as much as you can in your 401(k) so that the money is in there, but most of your money into an extremely safe investment fund, i.e. stable value, short-term U.S. Treasury or Money Market. Target date funds, growth funds, high yield funds and similar are traps in my opinion. Save from every check, but only invest into equity funds off of double digit correction.

If you have extra money to invest, for example into a Roth IRA, or have a rollover to do, I suggest opening an account at a discount brokerage, and follow a similar strategy as I suggested with your 401(k). You probably don't need a full-time financial advisor and the robo advisors out there are not equipped to handle the algo storm that is coming.

If you'd like a consultation, I am available for as low as $400 to help you do a financial plan and develop an investment strategy. To become a good do-it-yourselfer, you'll have to do some reading and I suggest subscribing to a low cost investment letter or two. My investment letter is called Fundamental Trends and if you use code 4ever120off you can receive if for $120 off every year.

The world economy and markets do in fact have major structural differences now than the WWII to 2007 period. Understanding and accepting this is vital to your long-term prosperity. Adjust accordingly as I've described. Emotional control in the face of volatility will be the key to coming out of what is coming with a better standard of living.