Many pundits and analysts are calling for oil and gas prices to be "lower for longer." I would point out that most of these people did not get anything right that I have discussed above. I believe that in the next two years, very possibly by next summer, that oil and gas prices are going to surge at least 50% and possibly double. The change in fact could already be occurring as I am a few days late in publishing this letter and oil prices have been rallying for 3 days now. Ultimately, stock prices of oil and gas companies will follow.

Understanding energy prices requires being able to juggle many moving parts. I am going to discuss some of the most important parts below. For those in a hurry, here is the short thesis:

Due to the normal annual depletion by existing wells of about 3% of their oil & gas, slowly increasing demand for oil & gas, dramatic cuts of planned spending on drilling for Q4 of 2015 and 2016 budgets by western oil and gas companies, the outright bankruptcy of over a dozen oil and gas companies, virtually every oil producing nation's need for higher oil prices to pay for their government budgets and now Russia's entry into the Middle East, most of the downward surprises and momentum in the oil and gas markets have played out. Going forward, while I expect volatility to be high in both commodity pricing and equities, the general trend is going to turn upward in the near future.

In a related industry, the solar power buildout is due for record years in 2015 and 2016 due to pressure by governments to slow global warming, as well as, further improvements in technology. As a result, solar energy is set for another leg up in the long journey towards becoming a major part of the energy mix.

Let's look at a few factors up close.

Supply and Demand for Oil & Gas 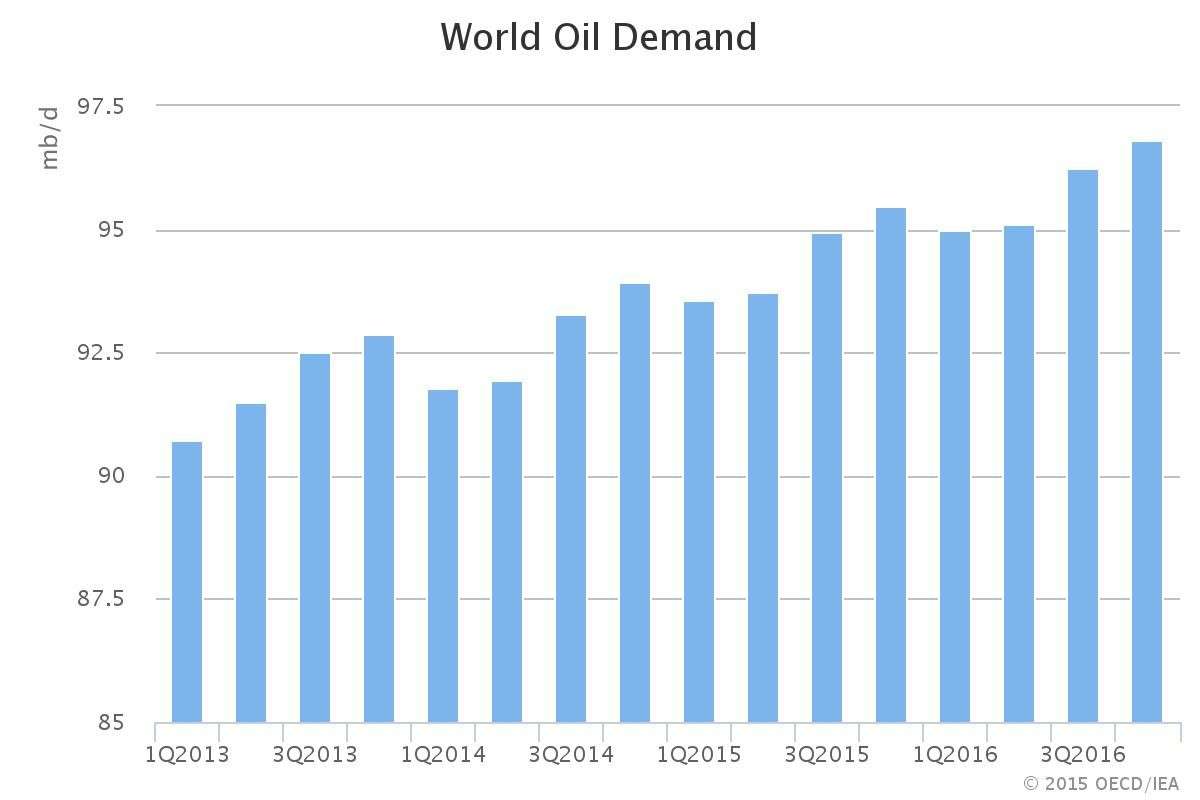 Global oil demand has slowly crept upward in recent years and is about 95 million barrels of oil per day. The International Energy Agency anticipates that demand will grow slightly into next summer. Supply of oil while staying ahead of demand for the past year is only a million barrels in excess as I type. While this seems substantial, the U.S. is anticipated to be producing 400,000 fewer barrels per day in Q1 2016 than in Q1 2015. Canada is also going to be producing less. Saudi Arabia pumping at a record pace is the primary factor keeping supply above demand. They can't keep their pump rates at such a high level for much longer for physical, field and personnel reasons.

This all adds up to mean that any disruptions to oil and natural gas supply coming out of the Middle East could cause the current "glut" of oil in storage to be used. Current inventory of oil and natural gas is at 5 year highs, however, that only represents about two months of cushion of supply before prices would be significantly impacted. Global oil executives, including this week from Royal Dutch Shell, pointed out that the destruction of drilling activity in the west and U.S. in particular, could lead to a dramatic shift in pricing relatively quickly. This applies to both oil and natural gas as a significant portion of natural gas is brought up from oil wells.

With regard to natural gas, climate change is likely to keep demand for natural gas from decreasing for decades. Governments of the world, regardless of what you believe about climate change, are looking to reduce the use of coal for energy. The main substitute is natural gas. With 2015 going down as the warmest year in recorded history, no rhetoric is going to change that natural gas is slowly replacing coal globally - even in China.

With heating season already beginning in the northern portion of the country it is not hard to see burning off the glut of natural gas by spring. Swings in weather can cause much higher demand for electricity and natural gas. It is not outside the realm of possibility that hot and cold temperatures stimulating demand, combined with any drop in supply, could require that we tap into our excess fuel in 2016, removing the price cushion that exists sooner than many think could happen.

American and Canadian oil and gas producers have dramatically cut back on drilling activity and planned drilling activity. So, while we are producing more oil and gas than in recent decades, production has leveled and now appears to be tapering off. A steep decline in production over the winter could occur just as the next summer air conditioning and driving season ramps up.

If supply does fall off, it will take about 3 quarters for U.S. producers to ramp back up. We must remember that the easy financing money is gone now. While private equity firms are stepping in with some cash, banks are tightening up and won't likely loosen up for a long time as they have to digest some bad debts.

Companies that focus on natural gas appear to me to be where to focus longer term, although oil is likely in my opinion to have another high price period eventually, and at least return to the "normal" price of about $80 per barrel that I discussed in the Peak Oil Plateau article last year. With oil very likely to reach $80 per barrel next year and natural gas also rising, the most efficient and asset rich companies will be desireable to own. The natural gas producers index, as represented by an exchange traded fund we now own, is attractive as a core holding as it focuses on natural gas producers, but derives much of its value short-term from oil prices. 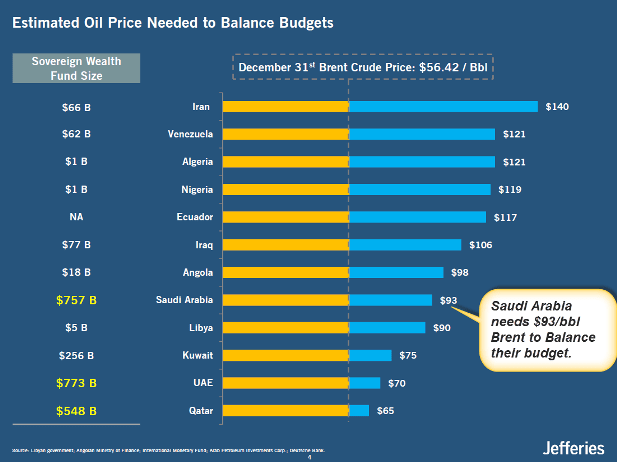 Many headlines declared "The Death of OPEC" last summer. Nothing could be further from the truth. With some of the lowest cost oil and gas in the world, they can for short periods of time put a lot of pressure on the higher cost producers. One such group is deep sea oil drillers, which I discussed in a recent MarketWatch article.

American frackers, while a residual target of OPEC's action the past year was not the primary target. OPEC knows and accepts that they are not going to regain American market share. They are not afraid of U.S. oil exports either as the U.S. still does import half of her oil with Canada being the major supplier and Mexico coming online. If the U.S. would export oil that would cause a major price disruption here. What we want to do instead is to export finished fuel because of the jobs it creates and some natural gas for financial reasons.

OPEC did have American banks in their crosshairs as they were handing out money to drill like it was candy on Halloween. Those banks have seen the light on tighter underwriting of oil and gas projects. OPEC has made its point.

One thing that OPEC doesn't want is a recession. So, you can expect them to manage supply in a very deliberate way. Tight enough to dissuade loose money from creating another massive supply/demand imbalance like we had last year, but loose enough to keep a spike from occurring that might damage demand. OPEC's target is expensive marginal supply, i.e. deep sea oil drilling and the most expensive frackers. They have accomplished throttling that segment of the industry for a very long time.

OPEC does not want to see oil prices stay at $50 per barrel. They simply can not afford that. Soon, they must see higher oil and natural gas prices than we have currently.

Last December, in another MarketWatch article, I discussed three scenarios that could lead to higher oil prices. One option was that Saudi Arabia cut back on production. Another was war breaking out somewhere. The final likelihood was the collapse of American oil and gas.

While we have seen some American oil and gas come off, there isn't going to be plugging of wells. And, there is no desire by the U.S. government to go back to importing as much OPEC oil as we did in the past now that we have cut it in half and largely control the import market.

What we have seen, is that the Russians just made their entry into the Middle East. Within days, the price of oil rose. That is not a coincidence.

So, while neither the Americans, nor Saudi Arabians want to see much more offshore oil drilling, that is the Russians bread and butter. Expect negotiations or disruptions that result in higher oil prices. I'm not sure which is most likely, but one will happen soon.

Solar is currently a very small part of the global energy mix, however, it is the fastest growing. Again, because of global warming, governments want to see solar grow. Higher oil and gas prices would help that endeavor.

In addition, solar technology is finally ready for prime time at the utility and commercial scale. In about half of the country, new residential and some existing residential, solar is cost effective now. In the next few years, it will be cost effective almost everywhere with the next advances coming to market soon. We should expect a solar boom soon. Keep in mind that solar is as much technology as it is energy.

American subsidies are set to be reduced after next year, so I expect a big year in 2016 for solar companies and then probably a pullback. If their backlogs of business mean anything, it is almost already assured that solar will grow fast again next year, despite tepid and in one case weak stock prices.

In new articles to be published on MarketWatch, I lay out the case that I believe that inflation is coming in the next few years. The short story is that governments have overspent and must print more money to pay down those debts to avoid severe recessions. That is their default setting for better or worse (I think better than severe recessions due to the human impact). Cutbacks in energy production expected to cause a rise in energy prices short-term and difficulties with water globally will complicate the inflation picture.

We own assets that will do well in a more inflationary environment and will do relatively better if governments take us down the severe recession route. Here are short descriptions of our core holdings:

Obviously, we didn't get purchase prices exactly at bottoms. It is not realistic to think that is consistently possible. However, we did average in and get prices well below the midpoint between previous highs and recent lows - generally 50-80% below previous highs.

Being patient and truly long-term investors is the play here. I know that controlling our emotions during volatility is difficult, whether its with money or anything else in life, but that is what we have to do. Smart, patient and emotionally controlled is usually well rewarded.

I meant to keep that short and to the point. I hope I did. If you would like to learn more, read my articles on MarketWatch and then give me a call. My call schedule is online - fill out the new contact form if you are not a client already.

Prospective new clients should contact us ASAP as there are still wonderful assets to be had at good and some great prices.